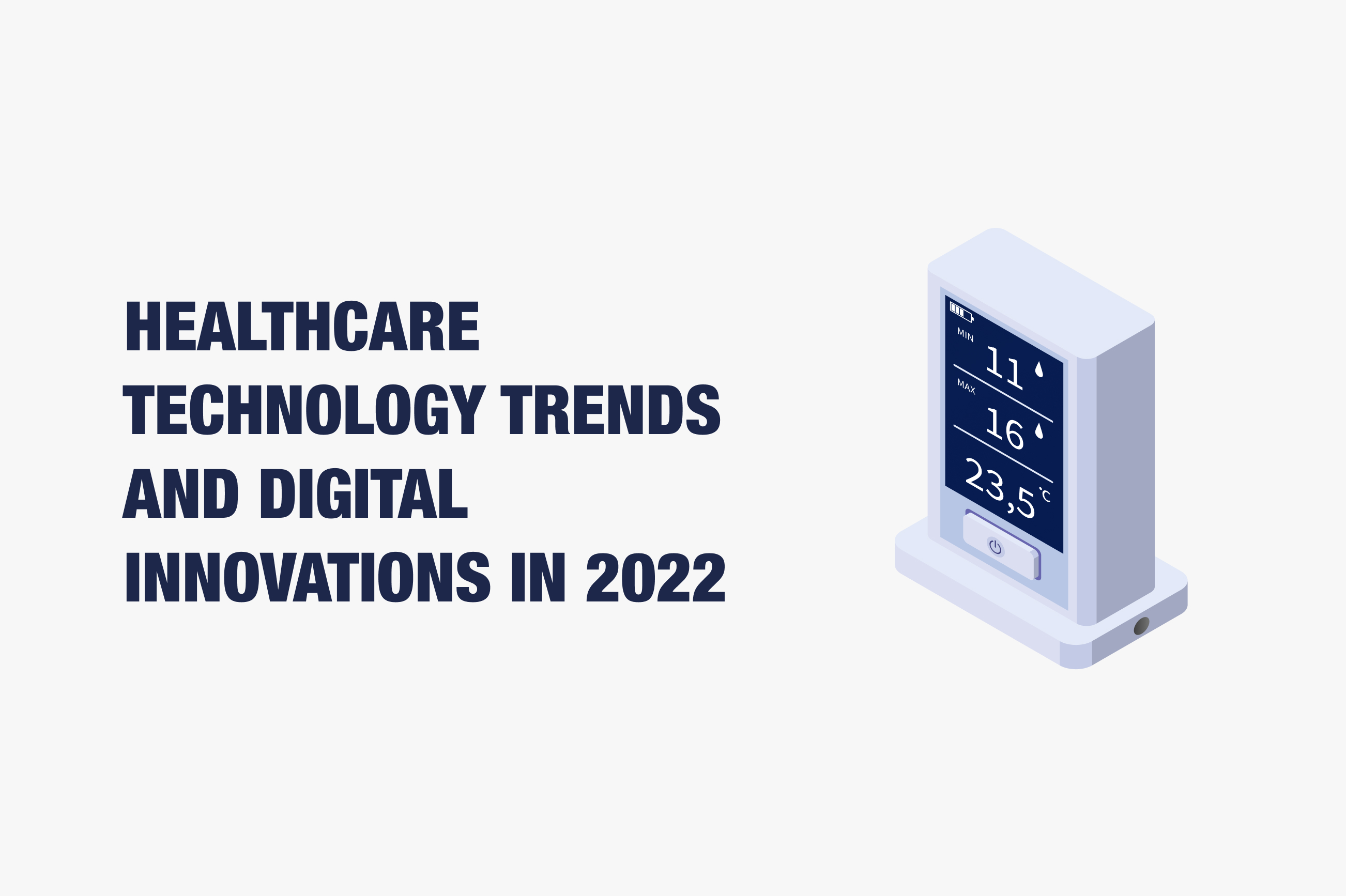 Owlab
Our blog
Healthcare Technology Trends and Digital Innovations in 2022

The healthcare industry is considered one of the largest and most important in the world. And this is not surprising! After all, medicine has always played an important role. Every year, not only new discoveries and medicines appear, but also technologies are improved that have a tremendous impact on this area. Thanks to healthcare mobile apps development, the development of AI and telemedicine, the healthcare sector has been transformed and many processes have become digitalized and become more efficient.

However, it is important to keep in mind not only the trends shaping the development of medical technologies, but also the fact that outdated software and infrastructure. After all, these factors are critical to the success of modern hospitals. The introduction of innovations is impossible if the infrastructure of medical institutions is not prepared for this. The integration of new technologies is a complex process, so the task of developers is to replace obsolete technologies with more modern, reliable and efficient ones.

In this article, we will talk about the trends that determine the development of medical technologies in 2022 and how digitalization affects modern medicine.

The introduction of artificial intelligence (AI) systems in medicine is one of the most important modern trends in world healthcare. Artificial intelligence technologies are fundamentally changing the global healthcare system, making it possible to radically redesign the system of medical diagnostics, develop new medicines, and generally improve the quality of healthcare services while reducing costs for medical clinics.

Worth mentioning is Microsoft's AI system called Project Hanover, which is designed to catalog biomedical research from PubMed. This system significantly reduces the time of cancer diagnosis. Not only that, AI helps make decisions about which medications to use for each patient. Mental health is also very important, because many psychological diseases such as depression are called diseases of the 21st century. Artificial Intelligence has had a huge impact on the fight against the consequences of the COVID-19 pandemic. The researchers used machine learning to create a model for predicting the spread of the disease, and using artificial intelligence to determine the trends in the psychological state of people in connection with the isolation.

AI can also detect diseases that are associated with changes in chemical processes in the human brain. Dementia is one such disease. A person’s memory is disrupted, communication skills deteriorate, and mental activity becomes almost impossible. However, the symptoms of such diseases can take decades to appear, so early diagnosis of dementia is one of the most effective ways to treat the disease. Artificial Intelligence allows you to identify the disease in the early stages, which in turn can, in some cases, completely eliminate the symptoms.

Chatbots significantly increase the effectiveness of telemedicine, and the use of advanced technologies and machine learning makes chatbots more productive and effective in diagnosing patients. At the moment, AI doesn't completely replace the diagnostic process, but it helps a lot in this. The development of chatbots using machine learning takes telemedicine to a new level, because the doctor will no longer need to spend time interviewing the patient, all the data will be collected by the bot, which later transmits all the information about the patient to the doctor.

Telemedicine and its Evolution

The COVID-19 pandemic and quarantine regulations have posed new challenges for medicine. In 2022, doctors are constantly holding video conferences with their patients, giving recommendations and advice on treatment. The infrastructure for remote patient care has improved significantly, and this trend will only grow.

Modern medical applications have extensive enough functionality to replace a trip to the doctor, and if you add additional gadgets that can track patient performance (for example, fitness bracelets or pulse and blood sugar meters), then they become simply indispensable for some people. For example, there were cases when the Apple Watch saved lives. The man fell in the winter and lost consciousness, the smart watch recorded the fall and called the rescue service. Doctors noted that if not for the Apple Watch, the man's condition could have been much worse.

Augmented reality plays an important role in modern surgery. Some clinics are already using mixed reality glasses such as Microsoft Hololens 2. They allow the surgeon to perform operations more efficiently, and these glasses can also transmit images to other specialists, who in turn can give advice. This is especially useful in training new surgeons. Already today, VR & AR makes it possible to more effectively train future doctors and specialists, especially when paired with Haptic Feedback technology.

The Internet of Medical Things (IoMT, Health IoT) is an infrastructure of smart devices, software, healthcare systems and individual smart services. IoMT improves and develops the healthcare industry, helps to provide care remotely and collects more information about the patient. Conventionally, all IoT devices and solutions in the field of medicine can be divided into two types: The list of tasks of IoT technology includes solving the administrative and managerial tasks of the hospital. So, with the help of IoT devices, it is possible to keep track of the number of medicines, the condition of the equipment and the need to purchase a new one. IoMT solves several problems at once:

The problem of the shortage of donor organs for transplantation forces us to look for biomedical solutions that do not require the use of donor material. Regenerative medicine technologies are considered the most promising. These include gene and cell therapy and tissue engineering. Another area of regenerative medicine has gained rapid development - bioprinting, when tissues and organs are created from conglomerates of cells, like a constructor.

Bioprinting takes place using specially designed 3D bioprinters, similar to how various parts are printed on 3D printers - layer by layer, according to a digital three-dimensional model. At the same time, printer cartridges are filled with spheroids - conglomerates of cells, which are applied to a special substrate - a kind of biopaper. After printing one layer of cellular spheroids, a second layer is applied on top, which fuses with the first. In this way, a three-dimensional living object is gradually obtained - a tissue or an organ. What seemed like science fiction 10 years ago is now actively developing as a separate branch in medicine.