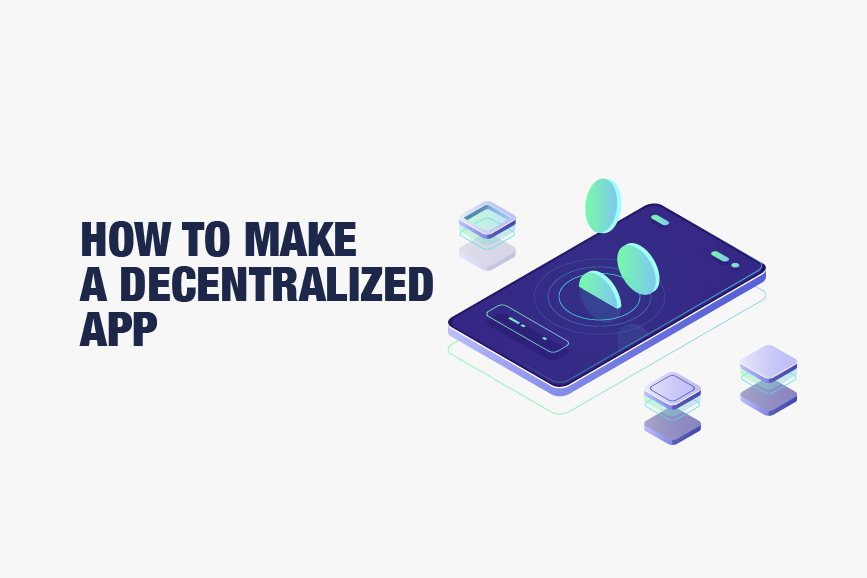 Owlab
Our blog
How to Make a Decentralized App

How to Make a Decentralized App: A Concise Guide

Ours is the age of disruptive technologies that robustly transform an ever-growing number of industries. One of such ground-breaking achievements is blockchain , which is swiftly penetrating such digitally-driven fields as cyber security, gaming, finance, healthcare, real estate, and even the public sector.

One of the possible use cases of blockchain is decentralized app (dapp) development which has been gathering significant momentum lately. But before going into details about how to make dapps, let’s find out essential facts about this software type.

It is easy to understand the underlying principles along which dapps work when you know how blockchain is organized. This know-how is essentially a database distributed across multiple nodes of a computer network. Thus, information stored on them in digital format is spread over the computers linked to the environment.

Consequently, decentralized apps are grounded on the same structure. Very often built on the Ethereum platform (generally associated with its native cryptocurrency), such apps run on peer-to-peer networks. It places their functioning outside the control of any single-handed authority but makes them dependent on the consensus of all stakeholders involved in the respective blockchain operation.

How is that different from the conventional apps we are used to? To answer this question, let’s have a look at the two major aspects of a decentralized application vs. a standard application.

What are the merits and demerits of decentralized app architecture? As a developing company specializing in creating dapps and other blockchain-powered products , Owlab considers the following benefits of decentralized applications pivotal.

Before building a dapp, you should clearly envisage their downsides as well.

As you see, the advantages of dapps significantly outweigh their shortcomings. And you will be able to make the most of them once you include some mandatory features in them. When dealing with blockchain development , it is crucial to build dapps that possess the following features.

Once you know what to aim for, it is time to embark on the dapp-building mission.

How to Create a DApp: An Algorithm to Follow

Through our decade-long presence in the mobile app development niche, we have arrived at a foolproof procedure that, slightly modified, can be employed for making decentralized apps as well.

Thinking about how to build dapps, you should first of all take care of a smart contract. This code is a backend component of a dapp that exists on a chain and comes into play automatically as soon as specific conditions are met. It is the core of the decentralized logic a dapp relies on, and it conditions the actions the solution performs based on the chain consensus.

Since the blockchain is the place where smart contracts reside, you should select one to be the basis of your dapp (or several of them if you decide on a cross-chain solution). The most popular choice of a blockchain for these purposes is Ethereum. It is inhabited by numerous users with their own crypto wallets, so dapp development can proceed faster (especially if you integrate WalletConnect to facilitate across-the-chain wallet integration). Yet, if creating a new crypto wallet is a part of your dapp building plan, you can opt for any blockchain you fancy.

The necessary tech stack to develop an Ethereum dapp comprises Ganache, the Truffle software suite, the Remix environment, and Solidity as the basic programming language.

In terms of creating a UI, dapp isn’t that different from a regular app, so it is easy to answer the question of how to make a dapp’s frontend if you have expertise in designing UI/UX of centralized apps. A typical formula of success in this endeavor is to kick off with a low-fidelity UI of a prototype which then is upgraded to a high-fidelity one . After intense user-testing of the obtained model, you should act on the feedback, reinforcing the UI/UX of the future dapp.

A distinctive peculiarity of decentralized apps is that the execution of transactions on a blockchain isn’t immediate, so dapp functions aren't performed at once. To inform users that the software isn't frozen, but the action is in progress, you should include some kind of animation on the UI showing that the action is just suspended to be verified on the chain.

As for the choice of tools, you can pick any technologies leveraged for standard frontend creation – React or Node if you are building a web app and Kotlin or React Native for mobile products.

In case your dapp is going to make use of huge data volumes, run reports, provide analytics, or do any other things not covered by on-chain transactions, you will have to link it to a web solution dwelling in a private server. That is why you should envisage some centralized backend elements (APIs) in your dapp that would connect smart contracts to the web software.

This is a standard procedure in any app creation cycle which is recommended to be implemented regularly starting from the early development stages. As a rule, as soon as a new element or functionality is built, it should be thoroughly tried out by the QA team. Such a meticulous ordeal is mission-critical for decentralized apps, because, once deployed, a smart contract can’t be modified. So in case any bug survives the “disinsection," it will live forever on the blockchain, causing all kinds of trouble for dapp users.

One more thing to remember about testing decentralized apps is that only frontend checks are performed according to a customary routine. To verify the seamless functionality of a smart contract, it is necessary to make use of the testnet network.

The procedure of making the finished dapp available for the user audience doesn’t boil down to the classic uploading of it to the App Store or Google Play. You should also switch its backend portal to a live production environment and add a smart contract to the blockchain of your choice. Since the entire process isn't a breeze, you can leverage specialized services (for instance, Infura) to streamline the deployment labor.

As the smart contract lives in the blockchain, unaffected by any changes, you don’t have to worry about it for years to come. However, the frontend needs to be updated from time to time to keep the UI appealing and fully functional.

Blockchain solutions are getting significant traction nowadays, with the global spending in the niche expected to soar from $4.5 million two years ago to $19 million in 2024. Decentralized apps grounded on this technology provide multiple benefits to both owners and users, yet developing them has a number of fine points to be taken into account. The experts of Owlab have sufficient experience and adequate skills to tackle the end-to-end development of decentralized apps that will impress you with smooth functioning and moderate price.